We can put a man on the moon, but we can't make a shower caddy that actually WORKS.

Over the years, we've had a lot of different shower caddies that, for one reason or another, either rusted away & fell apart or wouldn't stick after awhile. It's frustrating. We have a lot of shower crap, or as Kyan from "Queer Eye" would say, "product", and balancing bottles and razors on the edge of the tub just isn't an option.

The last shower caddy we had absolutely refused to stay stuck on the tiles, no matter how much I cleaned and dried the tiles and cleaned the suction cups. The weight of it kept pulling it down from against the wall to against the shower head. There's nothing quite like rinsing the shampoo out of your hair and suddenly have bottles and razors come cascading down over your head and clattering into the tub. I tried everything to keep that bastard at the top of the shower pipe. Wire. Leather cord. Nothing worked.

I gave up and went to Fred Meyer, in search of a "new and improved" shower caddy. I swear I spent more time comparing and contrasting shower caddies that day than I did when I bought my car a couple of years ago. I finally settled on a metal caddy with a big ass suction cup and a rubber grippy thing that looked like it was supposed to grip the top of the shower pipe.

I got it home and put it in the shower. Eh, it looks OK. Kind of small. But at least it's sticking. That lasted all of about 2 weeks, tops. The friggin suction cup is SO large that it overlaps the grout channels, so any kind of long term suction just ain't gonna happen. Then the rubber grippy thing gave way and again, crap was raining down on my head in the shower.

To quote the famous line from "Network": I'M MAD AS HELL AND I'M NOT GONNA TAKE IT ANYMORE!

Then it hit me: WWRGD. That stands for "What Would Red Green Do?" Red Green was a really funny Canadian comedy that ran for years, episodes have been shown in the States on PBS. Among his famous catch phrases are, "If the women don't find ya handsome, they should at least find ya handy" and "That's right, we'll use the Handyman's Secret Weapon: Duct Tape".

So I got out my trusty roll of duct tape. And I defy this fucker to come loose again. 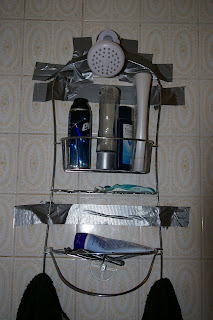