Makin' Mix Tapes (for some reason Blogger won't let me type in the title bar)
I got this KILLER button in the mail today from Kris. THANKS AGAIN!! I cracked up when I opened the envelope. I put it on my tape case in my car. 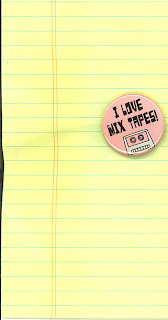 The funny thing is, I've been planning on making some mix tapes for my trip to Canada, since I have an extremely long drive from Bonney Lake to Port Angeles to get the ferry to BC, and from Anacortes to Bonney Lake on the way home!! (We're talkin' 3 hours each way) So, to get this button was just PERFECT timing!

I've been making mix tapes for as long as I can remember. "Back in the day" when all I had was a clock radio and a tape recorder, I'd hold the mic up to the tiny speaker and tape off the radio. When I was 13, my parents bought me a stereo for Christmas, so I hung the tape recorder mic down onto one of the speakers and taped that way. My uncle, who was Sandwich's only TV repairman & TV salesman, gave me a small, portable boom box in the early 80's, so I'd tape my records, then play the tapes in the car on the little boom box or play the tapes on the first portable tape player that came out in the early 80's. As I started to spend all my allowance and/or gift money on records, my parents realized that this music thing wasn't just "a phase", so they caved and gave me a real tape deck for Christmas when I was a freshman in college. Then I really started making mix tapes in earnest!! It's gotten to the point where I can even fast forward through a song and know just when to stop in time for the next song to begin. I suck at math, but I can easily calculate how many songs will fit on one side of a cassette based on how long each song is. You might get about 8-9 Dead songs on one side, but if I'm taping my 1970's era 45's, I can fit 14-15 songs on one side.

I just finished my first mix tape for my trip, which contains alternating songs by... 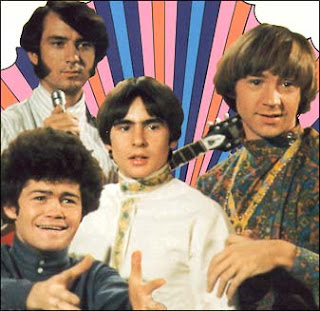 Yes, that's right, I LOVE the Partridge Family and the Monkees. I can still remember watching the Monkees in the late 60's on Saturday morning TV, and Friday nights in the early 70's wouldn't be the same w/o The Brady Bunch and The Partridge Family back to back. I feel very lucky to have gotten to see 2 Monkees shows in 1986, sans Mike Nesmith unfortunately, and David Cassidy last summer. Yeah I know, they were both manufactured groups, but the guys in the Monkees actually all have musical talent and if you don't believe me, give the album "Pisces, Aquarius, Capricorn and Jones, Ltd." a listen. They were the first band to use the new musical technology known as the Moog Synthesizer. That's right, the first. That album contains some stuff that was just a bit too sophisticated for the TV show, and their song "Daily Nightly" caught my attention when I was very young. It's been my favourite Monkees song since then. Give it a listen sometime, it's extremely trippy & psychedelic.

And by the way, you have the Monkees to thank....or blame....for music videos too. They were the first to marry video of the band's antics to shots of them lip synching to the music. Mike Nesmith's other claim to fame, besides his mom having invented White-Out, is that he was one of the foremost pioneers of what is now the modern music video.

You also have to admit, both Davy Jones and David Cassidy were big time adorable, with their boyish good looks and big brown eyes. And if there are any Guns & Roses fans out there, Axel Rose's little dancy moves on stage are copied almost exactly from the way Davy Jones danced on the Monkees. The Monkees also reminds me of my bff and college roomie, Michelle, who also shares my love for them. We had so much fun partying to Monkees records at St. Joe's.

As for the Partridge Family, they remind me of summers and vacations with my cousins Sharon & Diane - us seen here in approximately late 1968 or early 1969 . 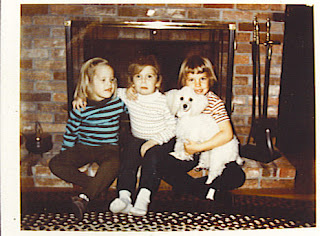 They used to come up from Long Island to visit their grandparents (my aunt & uncle) who lived down the road from my parents (walking distance) all summer and for all school breaks, except Thanksgiving. The 3 of us were really into the PF and Sharon had a HUGE crush on David Cassidy, while Di and I fancied the first "Chris", Jeremy Gelbwaks. We'd even stop playing on summer nights at 8:30 to go inside to watch the show, then we'd go back outside at 9 pm to continue playing. On rainy days, we'd be at my house in "the coop" (a building on my parents' property that was turned into a cool little place for them to entertain - there was a wet bar, stereo, bathroom, gas stove, fridge & freezer) 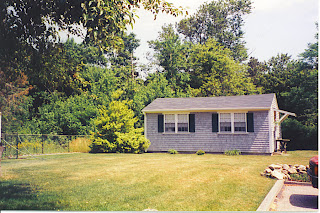 put on the Partridge Family records and sing along, playing air guitar or making drums out of coffee cans and padded chair seats, using pencils for drumsticks. That's how I learned to drum along to music really well, despite my mother's refusal to let me take drum lessons no matter how hard I begged and pleaded. Sometimes my cousins and I would stand on the picnic table outside and take turns singing the songs. Loudly. In our shrill 6, 7 and 8 year old voices. Good thing the Cape wasn't overpopulated like it is now, so there was no one to hear us except our patient (or deaf) families.

Late in the summer of 1972, we had a hurricane hit the Cape fairly hard. All the power went out early in the day, but I had my battery operated record player, so I put on a concert in the livingroom for my stuffed animals, with me singing along with my PF albums. They were a very receptive and enthusiastic audience too. And how cool did I feel in this "gen-you-wine" cobalt blue crushed velvet vest and pants suit, with the silver chain vest closure and white blouse? I was waiting for the PF bus to pull up in my driveway to whisk me off for some gigs! 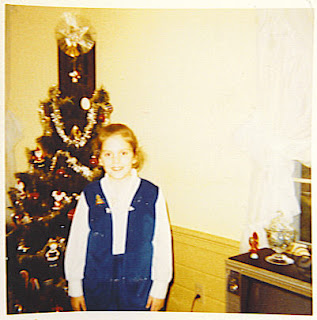 The music is pleasant, and a lot of the same writers & musicians appear on both groups' album credits. Say what you want about David Cassidy. He was a fan of hard rock, he is an extremely talented musician, but he gave his all singing these sweet but sappy ditties that I'm not ashamed to still listen to and admit that I love, even though he truly hated the songs.

And both groups remind me of a really wonderful time in my childhood.