The heat is on

"It's Hot.
Africa Hot.
Tarzan couldn't take this kind of hot.
I don't think I can stay here if it's gonna be this hot." Biloxi Blues
Yes that's right, Pacific Northwesterners are bitching about the weather again. It's who we are, it's what we do. We don't like it this hot. Some of us moved here specifically for the rain. The thing that kills me is all the people flocking to Home Depot to buy up fans and air conditioners. You'd think that everyone would have at least one fan in their homes from prior heatwaves!! 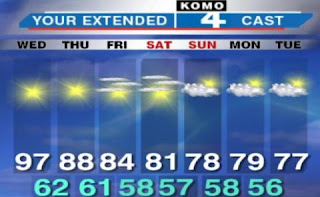 Anything in purple is considered the "Excessive Heat Warning Zone." 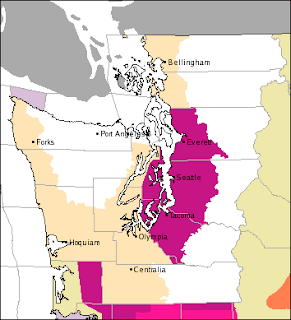 And Brian has to go to Albany, Oregon today, then to Portland on Thursday, and home on Friday night. It's gonna be hot down there too. He is not a happy camper. 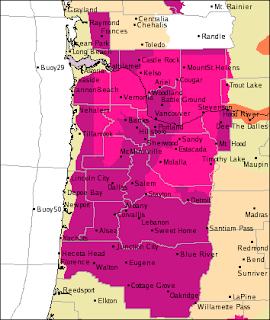 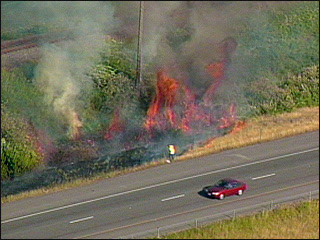 But at least I don't live in Eastern Washington, where it stays hot like this ALL summer. And yeah, it's supposedly a "dry heat" but you know, heat is heat. It's uncomfortable, humid or dry. 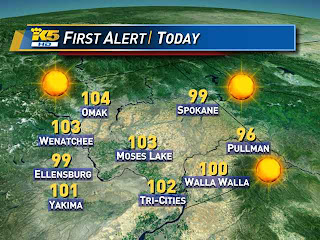 Here are some area high temperatures from yesterday. What makes these highs so amazing is that places like Astoria, Quillayute, Hoquiam, Shelton & Forks are coastal and usually stay cool in the summer; Friday Harbor is in the San Juan Islands and rarely ever gets that hot!
Astoria, OR: 92
Vancouver (WA): 104
Portland, OR: 102
Hoquiam: 99 (All time record high)
Shelton: 98
Forks: 93
Bremerton: 91
Port Angeles: 91
Quillayute: 93
Olympia: 90
Seattle: 89
Friday Harbor: 87
Now this is what I'm talkin' about!! Next stop: Juneau, Alaska! Seriously. Not this year, not next year, maybe not even for 5 years, but we will be relocating to Juneau at some point in the future. 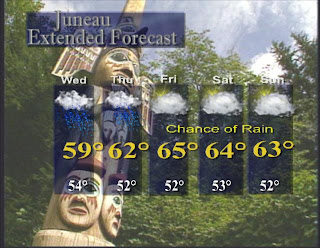 Val and I had a really great discussion the other day about reducing one's "carbon footprint". The 2 things that have no wiggle-room for me are needing my car to get to work and the use of air conditioning. It never occured to me that Euro cities don't utilize air con the way we do over here, and Val said she was surprised to read so many American blogs and comments where we talk about cranking up the air con. I was raised in hot, humid Massachusetts, then spent 10 years in the Bay Area, 6 of which were in Marin County, where it gets hot like this on a daily basis. I was miserable and cranky. I have passed out from excessive heat. I vowed "never again". So, I guess my carbon footprint is what it is. The one good thing is that our central air system at home is extremely efficient, and my car is also fuel efficient, so I do what I can, but I make no apologies for putting my personal comfort first. When I was 22 and got my first car, I specifically requested no air con because it was bad for the environment. I was young, foolish and trying to change the world. Now I'm just old and cynical.
On another note, some of my alltime favourite places in the entire universe made the Top 10 Cities in the USA! Here is the list:
1. New York
2. San Francisco
3. Chicago
4. Santa Fe
5. Quebec City
6. Charleston, SC
7. Vancouver, BC
8. Montreal
9. Victoria, BC
10. Seattle
I'm sure Canadians will be so pleased to know that Quebec City, Vancouver, Montreal & Victoria are considered "US Cities".
Posted by JoJo at 12:39 AM