And yet, I feel safe

The west coast is beautiful, but living here can come at a price. The closer you get to the coastal communities, the more Tsunami Warning signs you see. 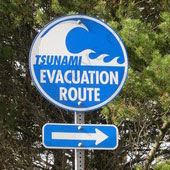 My personal fave is this one, with the guy frantically trying to climb up the cliff before the big giant wave hits him. There's also a story about the time, sometime in the 1980's I think, that there was supposed to be a tsunami that would make landfall in the San Francisco area. So a whole bunch of people went down to Ocean Beach to watch. Fortunately for them, by the time the wave got across the Pacific to SF, it was tiny. 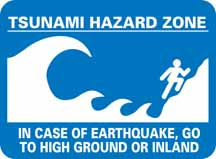 The Western United States is located on the notorious "Ring of Fire" (cue Johnny Cash song), that danger zone of fault lines, quakes, plate tectonics, volcanoes, geothermal activity and tsunamis that ring the Pacific from SE Asia, up eastern Russia, over to Alaska and down the coast from Canada to Chili...including all of the Pacific Islands. Did you know that Yellowstone National Park is actually a giant volcano? If you stand in Yellowstone and look around at the mountains that ring the park, you are actually standing inside the crater looking at the top edge. That is why there are so many geysers and hot springs at Yellowstone. The Napa Valley in California is also very geothermic, with its own Old Faithful Geyser and hot springs in Calistoga.


The volcanoes in the Western US are in the Cascade Mountains, starting with Mt. Lassen and Mt. Shasta in northcentral California near Oregon, and Mt. Bachelor, Three Sisters and Mt. Hood in Oregon. Washington, however, claims the rest: Mt. Adams, Mount St. Helens, the crown jewel Rainier, Glacier Peak and finally Mt. Baker up at the Canadian Border.

The domes of these volcanoes are unmistakable as they dominate the sky and punctuate the Cascade Range. I first saw Mount St. Helens when we were on our way to Oregon a few years ago. The only other time I'd been past it, the day was overcast. But the day we drove to Oregon was clear and sunny. We rounded a curve in the highway and holy shit! There it was! This giant scar on a barren mountain.....although life has since returned to the area since the cataclysmic eruptions in 1980 & 1981. St. Helens has recently become cranky again, with minor ash eruptions, but major enough to close all access to it by road and trail for months a year or so ago.
This is a picture of a Volcano Evacuation Route sign. 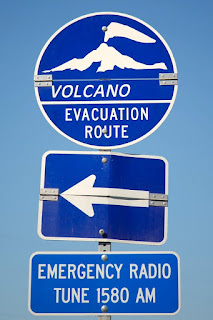 These signs are sprinkled all over the valleys in Puyallup, Auburn, Orting, Sumner and all of the other towns we drive through on a daily basis. Every person: Man, woman and child, all knows what "lahar" means and what they have to do when they hear the warning sirens wailing (if the warning sirens can be heard, which has been a problem). Schools have "lahar drills" where everyone evacuates and walks, or runs, in an "orderly fashion", in the direction of the nearest hill.

Because our volcanoes are covered in snow and glacial ice year round, the eruptions are vastly different from those in Hawaii where you actually see the red hot molten lava erupting and creeping down the side of the mountain. Therefore, we use the term "lahar" instead of "lava", because a lahar is a giant mud flow created when the snow and ice melt during the eruption. All of the signs point up to the hills. Yep, when ya live in the Ring of Fire, ya gotta have a plan. And that's our plan: "Head for the Hills". Makes sense, at least on paper, right? But here is the fundamental problem with "the plan": If there is one little fender bender off to the side of any of the highways, just one, mind you, that accident will bring traffic to complete gridlock with a ripple effect for miles in every direction.

The roads in Western Washington are unable to accomodate the unchecked and rampant development, especially here in East Pierce County. Small, two lane state highways are gummed up every day, including weekends. So you have to wonder how effective a "Head for the Hills" plan is when there is a giant mudflow of rocks, ice, dirt and giant fir trees bearing down on Eatonville or Graham, and which is arriving in 30 minutes or less (hey it's a better record than Dominoes Pizza). Especially since the lahar will follow all of the paths of the rivers, and there are a lot of rivers that start on, or near, Rainier. And a lot of communities and homes are built on the rivers.

For example, on my way home, I take River Road. This is a picture I shot of Mt. Rainier from River Road. 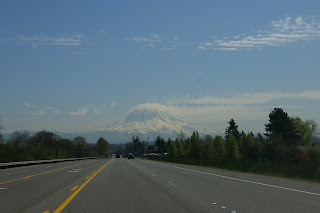 The Puyallup River is off to the left of the photo, below the greenbelt, although last winter when we had the torrential rain, the river was at road level. River Road is actually built on top of a very large levee, because to the right of this picture, it's all farmland which sits well below the road. If a lahar is on the way from Rainier, everyone on River Road at that moment is toast. If there is one accident on this road, traffic gets backed up to Interstate 5, so can you imagine what it will be like when people try to evacuate for the closest hill?

When Brian comes home from his job in Federal Way, he drives down into the valley, before starting the climb back up to the foothills, which are well above sea level, he has to cross over the Stuck River. Ditto to "toast". Bonney Lake is in the foothills so the lahar would go around us and wipe out Sumner. Well, that's all well and good if we are home when it happens. And by the way, you never say, "if it happens", you say "when it happens" because that is the reality we accepted when we chose to live here. However, if we were at work when it happened, we would be totally cut off from home. We'd probably be safe'ish, but also unable to get home no matter what direction we tried. So we just keep our fingers crossed that it won't happen in our lifetime and we go about our daily lives, hoping for the best. Rainier may be sleeping, but she's very much alive.

As an interesting side note, we saw on the news over the weekend that a group of students from one of the local high schools has made it into the National Science Fair, for their experiment of using solar powered LED's on the Volcano Evacuation Route signs, to make them easier to see at night.

Are we in imminent danger? Probably not. Do we still feel safe? Yes. We made the choice to live in a very seismically dangerous area when we moved to San Francisco in 1989. We weren't there 2 months when the Loma Prieta quake brought the entire region to its knees. If we didn't run back to the east coast after that, then we never will. Mother Nature demands respect and so we pay attention to the warning signs, have a family evacuation plan and an emergency kit. But it's the price we willingly pay to live in one of the most beautiful places in the world.