Making peace with the pine needle and other ramblings

So I haul my ass out of bed at 8:00 Sunday morning, which is really 7:00 but for stupid daylight savings time, and decide to finally clean the fur off the toilets and vacuum the filthy carpet for the first time in god knows how long. Brian decided to head out to the gun range to do some target shooting, so I let the doggies out in the back yard and started cleaning. We just purchased a Dyson Pet vacuum - pricey but well worth it, and I was marveling at the amazing job it was doing on the rugs. About an hour later, the house was vacuumed and dusted, and bathrooms were clean, and all was right with the world. Then I let the dogs in. 8 muddy, pineneedley paws later, I am looking at my once-freshly vacuumed carpet with chagrin.

I've lived up here now going on 8 years. Washington is called "The Evergreen State" for a reason (although the way trees are being cut down to make room for more developments, we may have to be called, "Formerly Known as The Evergreen State"). We have pine needles year round. All over the driveway. All over the backyard. Stuck to our shoes. Inside the cars. Ground into the carpets, especially on the stairs. Even when we get enough dry weather for Brian to use the blower on the driveway, it's coated with pineneedles in less than a day. There's no getting around it. So I have pretty much made my peace with the pineneedle because I can never truly eradicate it from my house.

Here's a sneak peak at our State Quarter, being minted this spring. Eastern WA ain't too happy about it because it has a distinctly Western Washington look but oh well. If they don't like it, they can secede. 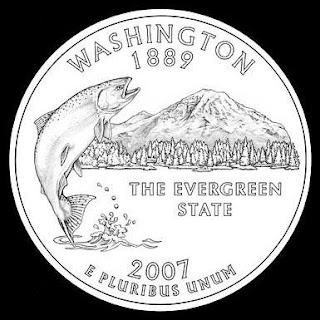 Could our state flag be more boring?

Which reminds me of an amusing story. Exactly 8 years ago, in March of 1999, I flew up here to interview for a job at a law firm. It was a round trip; the flight to and from San Francisco is only about 90 minutes so, while grueling, it's do-able. I rented a car at the airport to drive to my interview. As I was traveling along one of the state highways, I noticed that the signs looked like this:

It didn't register at first. I actually said out loud, "why do all the signs have pictures of George Wa.....ooohhhhhh....." Brian still gets a chuckle out of that story. 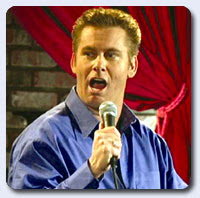 at Pantages Theatre in downtown Tacoma on April 12. 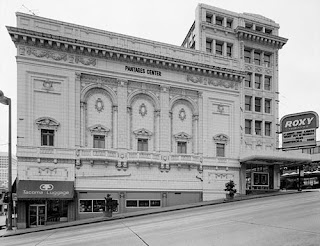 We've seen his special on Comedy Central at least 10 or more times, and it never fails to reduce us to hysterical laughter complete with tears, throat cramps and asthma attacks. Brian even said, "make a note so that we don't forget to bring our inhalers." To this day I cannot go to my eye doctor without cracking up, thanks to Brian Regan's routine about going to the eye doctor. I've had to apologize to Dr. Hartmann for cracking up when he's trying to do my exam. 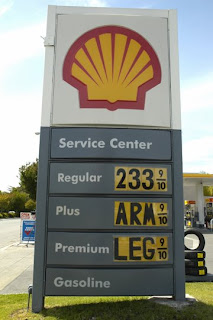 Gas Prices. They are going up by the hour. When I left Bonney Lake today, it was $2.79. How about where all of you live? I'd like to know what everyone is paying. And yeah I know, we pay far less than what Europeans and Canadians have been paying for years so we should quit our whining, but still, we're not used to these prices and it puts a crimp in the ol' travel plans.

Daylight Savings Time - a necessary evil or a major league pain in the ass? I vote for the latter. It allegedly saves us energy during the summer months because people don't have to turn their lights on till later. But I have yet to see any statistics on this for verification. Especially these days when more people have air conditioning, multiple computers and TV's per household, etc. But up here, while we certainly aren't as bad as Alaska, it stays very light, very late during June and early July. We get this perpetual twilight that can last till after 10:30, and on a clear night you can still see the remnants of the sunset at 11:30. Then dawn starts around 3:30. It sucks to go to bed and it's light, get up to pee at 3:30 and it's light, get up at 6:00 and it's light. I know, I'm in the minority in that I hate summer. I love our cold, dark, wet winters. But I fail to understand why Washington observes daylight savings time. Arizona doesn't. Neither do parts of Indiana. I see absolutely no reason why we can't stay on Standard Time, year round. Thoughts?
Posted by JoJo at 4:00 PM