Being from a rather large Italian family, I have about a million cousins. OK, maybe not a million, but a lot. The 2 with whom I am the closest are Sharon & Diane, as they are the only ones closest to me in age. Their grandfather and my grandmother are brother & sister. They lived first in Colorado, then Long Island, and spent every vacation on the Cape at their grandparents' house. My parents and I lived down the street from my Aunt & Uncle, so I basically grew up with Sha & Di. In 1977, they moved up to the Cape, to the next town over from me, so they went to a different high school, but we saw each other all the time.

This is Diane, me and Sharon, taken in about 1968 or 1969, sitting on the fireplace at my Aunt & Uncle's house. Di is 6 months younger than me, and Sha is 1 year older than me, so that'd make Di and I 4, and Sharon 5 or 6. They are truly the closest thing I ever had to real sisters. The poodle belonged to their grandparents. There is one detail about this photo that hasn't changed - both Sharon and Diane are wearing shoes, but I'm in my stocking feet, as usual. 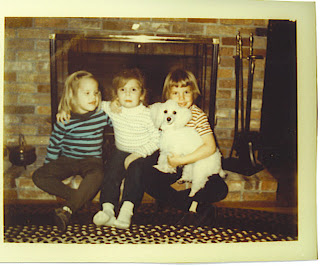 Some of my favourite memories of the 3 of us are taking turns singing Partridge Family songs on the picnic table in the summer, playing in the woods behind my parents' house in the fall and winter, building forts, swimming in their grandparents' pool, going to the beach, hanging out in the field at my parents', ice skating, riding bikes & skateboards, playing catch, walking on the railroad tracks, playing at the cranberry bog, sledding, holidays, birthdays, Christmases and sleepovers at each other's houses, getting up a "game", which was a Western-themed and ongoing game we'd play all summer long, with cap guns, cowboy hats, vests, etc....gosh, I could go on and on with fave memories of spending time with them!!! When we get together, we laugh, A LOT. I never really minded being at "the kids' table" on holidays because we would have so much fun laughing that the grownups would yell in for us to keep it down.

My mom had this really pretty fabric Christmas table cloth she used to put on our kitchen table. Diane and I would get to laughing, and one of us would end up spraying hot chocolate out of our mouth and nose, so she stopped using the table cloth. She grew so weary of washing it every couple of days.

When Sha got married in 1989, I was so incredibly honoured to be invited to spend the night before her wedding in her hotel room with her, Diane and another friend, Dotty. Oh did we have a ton of laughs that night too! 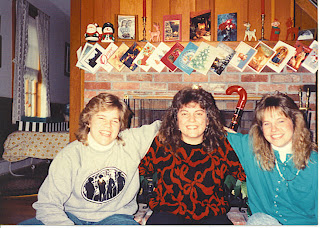 This picture was shot on Christmas Day 1988, as the companion photo for the first one. This was the last Christmas I spent with my family before moving here.

We shot another picture of the 3 of us sitting on the fireplace in 2003, but my dad had just died and I was wearing a ratty pair of shorts & tshirt, and just not looking my best at all, so I didn't post it. I miss them so much, but we keep in touch regularly!
Posted by JoJo at 5:57 PM