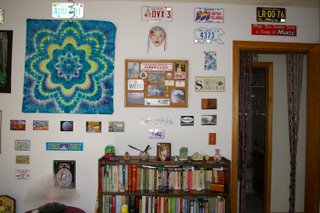 The beads seen in the door were given to me for my 10th birthday in 1974. Any of my old friends and family who read this will remember seeing them. When I got into punk rock in high school, I insisted that the "hippie beads" be removed, but fortunately, my parents held onto them. They've graced a doorway of every apartment and home I've had since 1988. Got the tie dye tapestry at a Dead show. I collect license plates, as you can see. 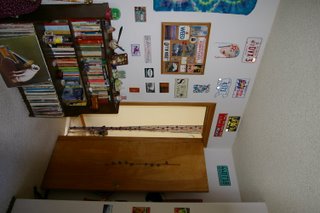 Couldn't figure out how to rotate this picture but you get the gist. There's little Pepper peeking into the den from the hall. My dad built me that bookshelf specifically to hold my record albums and I treasure this bookshelf more than anything. 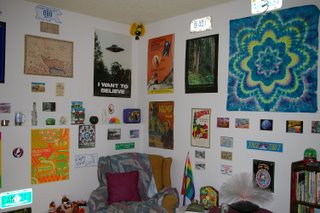 The "I want to believe" poster came with the X-Files Fan Club materials, which we joined just so we could get the poster. And yes, that's a map of the Ponderosa from "Bonanza" next to the IWTB poster....I scored that bad boy at the actual Ponderosa Ranch in Incline Village, Nevada, near Lake Tahoe. The ranch has since closed, but it was where a lot of Bonanza was filmed. They even had the Cartwright's house set up for tours. It was so cool! My dad and I visited the ranch once, and I took Brian there too.

The gold chair with the rucked up throw was in my parents' house when I was toddler till they replaced the livingroom furniture when I was in college (again, old friends and family will recognize this chair). When we moved to San Francisco and were desperate for furniture, they let us take it. To this day my mom teases me that she wants her chair back!! 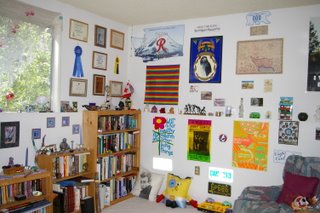 There are lots of 60's/hippie posters that we've accumulated over the years. Got the rainbow tapestry at a Gay Pride Parade in San Francisco; it's covering our fuse box! One of the pride and joys of our memorabilia collection is that Rainier Beer sign shaped like Washington State. We searched long and hard but finally located one in Snohomish a few years ago. The wall w/ the ribbons is our "wall of fame", and contains all of Brian's brewing awards. There is one award up there that's mine though, 2nd place in the Marin County Holiday Recipe Contest. I won for my cranberry bread recipe.

And yes, the rest of the house pretty much looks like the den....
Posted by JoJo at 9:39 PM