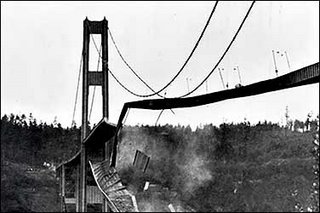 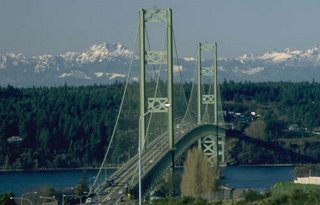 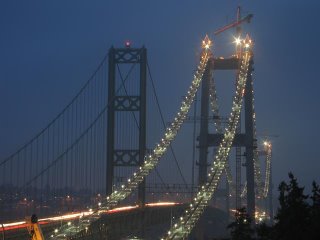 You've all no doubt seen the famous film of the bridge that is undulating in heavy winds and then collapses into the water. That was the first Tacoma Narrows Bridge. It was eventually rebuilt (photo #2 - those are the Olympic Mountains, not the Cascades), and now due to the population growth, a second bridge is being constructed. The bridge decks are being lifted into place right now, and they hope to have it open in a year. There's also a bar in Lakewood called "Gallopin' Gertie's".

Here's a short history of the bridge from Ketchum.org. Many thanks to them and to the people who shot the above photos. One note - the newspaper guy quoted below didn't take his dog with him when he got out of his car, and he let the poor animal plunge to its death. That part of the story always pissed me off.

The bridge earned the nickname "Galloping Gertie" from its rolling, undulating behavior. Motorists crossing the 2,800-foot center span sometimes felt as though they were traveling on a giant roller coaster, watching the cars ahead disappear completely for a few moments as if they had been dropped into the trough of a large wave.

The original bridge was a suspended plate girder type that caught the wind, rather than allowing it to pass through. As the wind's intensity increased, so did Gertie's rolling, cork-screwing motion -- until it finally tore the bridge apart. For the next 10 years, Tacoma and Gig Harbor/the Olympic Peninsula were once again unconnected by bridge. Then after 29 months of construction, a new, much safer Tacoma Narrows Bridge opened on Oct. 14, 1950.

The new bridge spans 5,979 feet -- 40 feet longer than "Galloping Gertie" -- and is part of Hwy. 16. The sunken remains of "Galloping Gertie" were placed on the National Register of Historic Places in 1992 to protect her from salvagers.

"Just as I drove past the towers, the bridge began to sway violently from side to side. Before I realized it, the tilt became so violent that I lost control of the car... I jammed on the brakes and got out, only to be thrown onto my face against the curb. Around me I could hear concrete cracking. I started to get my dog Tubby, but was thrown again before I could reach the car. The car itself began to slide from side to side of the roadway. On hands and knees most of the time, I crawled 500 yards or more to the towers... My breath was coming in gasps; my knees were raw and bleeding, my hands bruised and swollen from gripping the concrete curb... Toward the last, I risked rising to my feet and running a few yards at a time... Safely back at the toll plaza, I saw the bridge in its final collapse and saw my car plunge into the Narrows."
Posted by JoJo at 1:32 PM