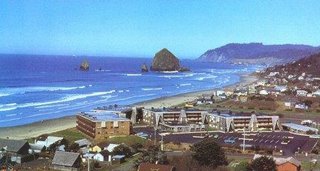 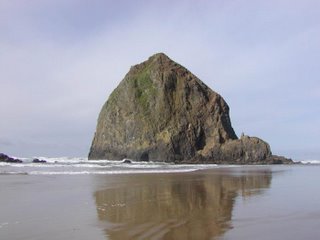 This is beautiful Cannon Beach, on the Oregon Coast. We vacationed here last August and I wish we were going again this year. It's known as a dog-friendly town, and Pepper had a blast running up and down the beach, meeting new friends and sniffing all kinds of stuff. The large rock is called Haystack Rock and these photos do not do it justice for its massive size. It's a bird sanctuary, so no climbing is allowed, and at low tide there are the most amazing tide pools I've ever seen.
The town was originally called Ecola, after the creek that empties into the Pacific. The Lewis & Clark expidition was camped at the mouth of the Columbia River and William Clark journeyed down to Seaside and Cannon Beach. In 1846, a Navy schooner, "Shark", wrecked while trying to leave the Columbia River. The cannon washed up on the beach, and in 1922, the town was renamed "Cannon Beach". I saw the cannon; it's not that impressive!!
Off the coast is Tillamook Rock which is the picture of the lighthouse. I do not believe it is manned anymore and I think it too is a wildlife/marine sanctuary.
Seaside is about 10 miles north and is way more "touristy" than CB, which is a bit more upscale. Seaside is fun though, with a lot of shops, boardwalk and lovely old carousel. 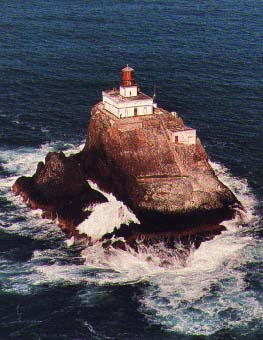